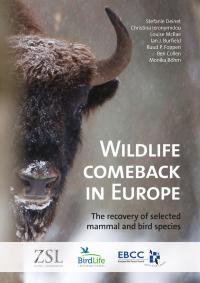 A few months back, in September 2013, the conservation initiative Rewilding Europe issued the “Wildlife Comeback in Europe”. The report was written as a joint effort with the Zoological Society of London (ZSL), BirdLife International, and the European Bird Census Council (EBCC) and got international news coverage, including articles in BBC News and New York Times. I haven’t had the chance to write about the report, but I wanted to take a few minutes to reflect on it because of its potential reach.

Unlike most environmental news these days, the message was positive. The BBC article quoted Prof Jonathan Baillie, director of conservation at the Zoological Society of London, as saying

We’re trying to find success stories so we can learn from them, so we can see what works and scale that up across the conservation movement globally. And it is really important that we focus on success and where we are winning.

I’m a fan of positive stories. I think environmental history since its beginnings as an environmentalist critique has been far too declensionist, too caught up in pointing out how everything has gone downhill. While that model of scholarship is successful at pointing out the problems of the world, it is often much less adequate for pointing out potential solutions. So I think we need to start thinking about environmental history as a possible instrument for change, and that means thinking positively and hopefully, which is something I’ve tried to do in my own work.

Reintroduction as an environmental practice is one of these positive narratives. Sure there is a declensionist story that can be told about animals brought to extinction that reintroduction is merited – but I prefer focusing on how and why the reintroduction itself happened.

European beavers are the greatest success story in the “Wildlife Comeback in Europe” report. Beavers had the greatest range expansion of any mammal in Europe, having expanded the area in which it lives 550% since 1955 (and since that is after the first reintroduction projects, the percentage would be even higher since 1900). The estimated +337,000 beavers in Europe in 2013 dwarfs the population estimate of 1,200 in 1900.

I was, however, disappointed with the chapter in the report about the Eurasian Beaver. I know that Duncan Halley, who has written about beaver reintroductions from a natural science perspective, reviewed the chapter. I don’t know where the authors got all their material, but several of the things they say about the historical reintroduction of the beaver are wrong.

First, the report claims, “Initially, the focus of the efforts was fur-harvesting, only later did conservation and ecosystem management become more prominent” (p.151) It also later states, “these efforts were motivated by the fur trade, comprised hard releases and lacked habitat suitability assessments” (p.154). There are two problems with these statements. (1) As far as the earliest reintroductions, which happened in Sweden and parts of Norway in the 1920s and 1930s, fur-harvesting was never a reason given for bringing back beavers. The entire effort was indeed framed as returning a missing part of nature, often in conjunction with attempts to protect areas as nature reserves. I’ve previously written about the involvement of hunting groups in the reintroductions who never talked about hunting beavers in the future and the Swedish conservation revolution inherent in the reintroduction project. All of these efforts should most certainly be classified as nature conservation. (2) In Sweden, habitat assessments were indeed carried out in the 1920s and 1930s in order to select suitable release sites. In the case of the first release in 1922, Dr. Sven Arbman wrote an entire report about the general habitat needs of the beaver and the provisions at the particular release location. I think this is a case where modern scientists are assuming that they know/do better than their historical counterparts – when the reality is that nature conservation and scientific assessments of habitat suitability went on 90 years ago as well.

Second, I found it odd that the discussion of the reintroduction efforts starts with Latvia, instead of with Sweden, which was the first reintroduction site in Europe; but that’s more a narrative structure complaint than a fact complaint. However, in the paragraph about Latvia, the authors say that beavers were reintroduced to Latvia “in 1927 and 1935 using individuals from Swedish stock” (p.151). This is wrong. The beavers brought to Latvia were not from Sweden — after all, Swedes were just reintroducing beavers themselves at the same time — but rather from Norway. Part of the correspondence between P.M. Jensen Tveit and the Latvian General Counsel in Oslo in 1939 about relocating the beavers in Latvia. From National Archives of Norway, Archive folder RA/S-6087/D/Da/Dab/L0090.

I found correspondence in the National Archives of Norway between P.M. Jensen Tveit and the General Counsel of Latvia in Oslo that indicates that Norwegian beavers were reintroduced in Latvia in 1928. I also found the license for Jensen Tveit to catch 2 pairs of beavers in November 1934 to send to Latvia for reintroduction. Each pair cost 200 kr and in all probability, the beavers were sent in spring 1935. The population expanded so much that in March 1939, the General Counsel asked Jensen Tveit to travel to Latvia to catch some of the beavers and translocate them to elsewhere in the country. The Latvians requested Tveit’s assistance because “there is no one there that can catch them alive.”

Third, although the Report states that the last beaver in Lithuania was not killed until 1938 (this statement comes from Halley 2003) and reintroductions happened between 1947 and 1959, it doesn’t mention that the Lithuanian State had actually already arranged for beaver translocation in 1934. In a letter from Jensen Tveit to Eric Festin dated 22 December 1934 in the Jamtli archive, Jensen Tveit mentions that he will be delivering two pair there in the spring or summer to strengthen the bloodlines, i.e. genetic diversity. I do not know if these additional beavers were also dead by 1938, or if the statement about the beaver’s extinction date in Lithuania is wrong. I would probably have to do primary research in the Lithuanian archives to answer that.

I appreciate the effort to include the beaver reintroduction story as a positive conservation history that more contemporary reintroduction efforts can learn from. But I find it frustrating that natural scientists continue to write these kind of documents without turning to historians to assist them. After all, the document is really about species histories, and who better to write a good history than a historian?