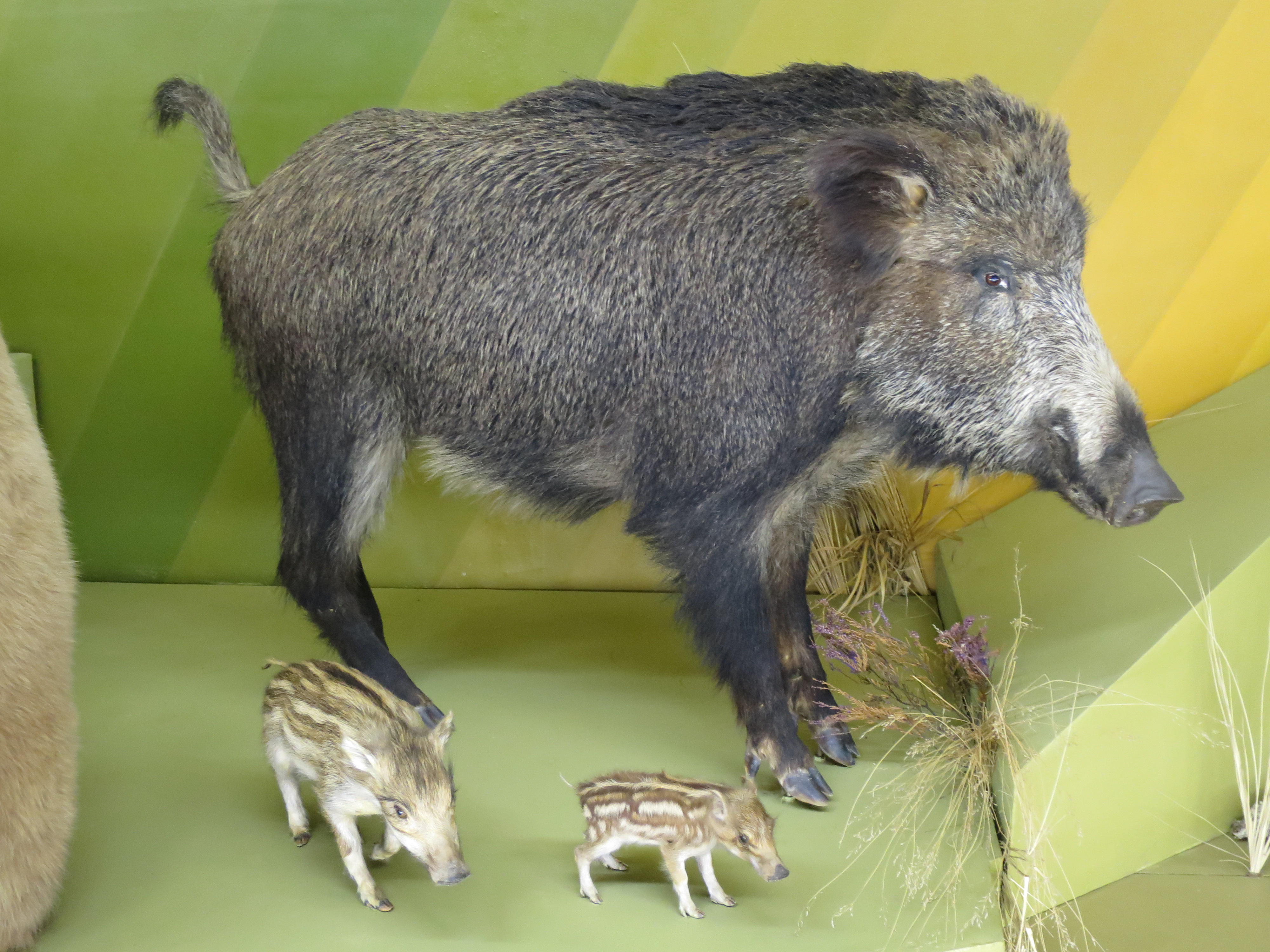 On 9 April 2015, I got to participate in a workshop on the potential opportunities and costs of reintroducing wild forest reindeer to Sweden. When Stig-Olof Holm publicly proposed bringing back the forest reindeer about a year ago, I was cynical to the idea. So when I was invited to talk about historical reintroductions in Sweden at a stakeholder workshop, I was both interested in sharing my historical viewpoint and hearing how others thought about proposed reintroduction. Wild boar on exhibit at the Latvian Museum of Natural History, Riga.

Rather than talk about forest reindeer (which I actually know very little about), my presentation focused on historical reintroductions in Sweden. It included a section on the wild boar. Wild boar was originally one of the three animals I was going to deeply research in my project (beaver and muskox are the other two), but because of time limitations, I had to drop most of the work on it. I do, however, have a basic sense of the conflicts over wild boar in Sweden.

Wild boar had existed in Sweden in the Stone Age, but after that point it gets very tricky to distinguish between wild boar and domestic pigs in the archeological record. Some wild boar were probably in medieval game parks to be used in noble hunts, but some also may have been roaming the forest as late as the early 1600s. When King Fredrik I decided to reintroduced wild boar to Öland (a large island southeast of the Swedish mainland) in 1723, he wanted them as hunting quarry. But the Öland farmers were not at all pleased at the idea of having wild boar running around and damaging their crops. Their objections carried the day and a decision was made to exterminate them in 1752. Within 15 years, they were gone.

Wild boar continued to be popular game park animals. In the 1870s, for example, wild boar were brought to a Södermanland game park by Oscar Dickson, a Swedish magnate who owned among other things the sawmill Baggböle near Umeå. Game parks are notorious for animal escapees. With stone fences and ditches, some animals are bound to escape. In the early 1940s, some boar who presumably had gotten out of parks were free living, but these were hunted down by a state-sponsored hunt.

Populations that had been in game parks in Skåne and Södermanland once again became free living in the 1970s. This prompted the government to commission a report “Vildsvin i Sverige”. An inventory was made in 1979 and found small boar colonies (10-20 animals) in numerous counties. The largest population, probably 50, was found in Tullgarn-Mörkö area on the border of Stockholm-Södermanland county line. After the report was issued in 1980, the Parliament decided was that the boar population should be held under control, with less than 100 animals in Stockholms län and none in the others. I’m not sure what action, if anything, was taken to bring about this desired reduction in number. In any case, it didn’t work. I think the position against boar continued to be debated and finally in 1987 the Swedish Hunting Law (Jaktlagen) declared that wild boar were part of the Swedish fauna. From that point on, recreational hunters would be the only control for the population.

Apparently, they’ve not been able to keep up with the pigs. Although hunters have ramped up hunts for wild boar–killing over 65,000 animals in the 2009/10 season–the boar population is growing exponentially every year. The current estimate of wild boar in Sweden is over 100,000 animals. As you can guess, there are some huge problems with the boar population growth, including significant damage to farmlands and crops and growing numbers of traffic accidents (3,714 in 2014). There are also concerns about cross breeding with domesticated pigs, as well as potential disease transmission between the wild and domestic pigs.

So why talk about wild boar at a workshop on reindeer? Well I think looking at the way historical reintroductions has worked (or not) can give us insights into possible issues with future ones. There are some key lessons about the wild boar:

All of these are potential issues that would need to be considered in the case of the wild forest reindeer. It was obvious from the presentations that the Sami reindeer herders are vocally against the plan because of potential mixing of the wild type with their domestic herds. Although the idea is to reintroduce the wild reindeer to specific places, the animals most certainly will not just stay where humans put them, as evidenced by the distribution maps of the reindeer reintroduced in Finland presented during the workshop. The hunters support the reintroduction plans because they see the wild reindeer as a potential prey, but I got a very negative response from the Svenska Jägarforbundet representative to a suggestion that some areas might need to be set aside from all hunting to aid in the reindeer establishment. These are all positions that we can predict if we look to history. We can also see that pleasing everyone is nearly impossible, so if wild forest reindeer are reintroduced in Sweden, conflict should be expected.