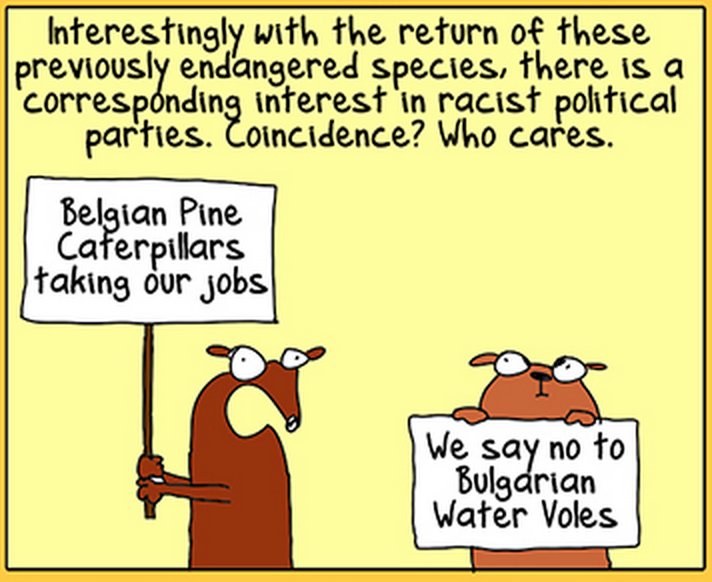 The results in the EU parliamentary election aren’t yet in tonight, but early returns show a rise in right-leaning nationalistic parties like National Front in France which is going to come out with around 25% of the vote. These parties are basically anti-immigrant and anti-Europe. Could this rise in nationalism roll over to reintroduction projects?

This week a group of 17 European bison (Bison bonasus) were released in Romania (see the Guardian story with video). These animals join the bison from two prior reintroductions–a herd of 5 in 2012 and 5 more in 2013. Bison have been extinct in the Carpathian mountains of Romania since 1762. They survived in the wild in Poland until 1927. After that, only captive animals remained. A breeding program and subsequent reintroduction has been quite successful: there are now over 3,000 bison running wild in Europe, according to a WWF article.

A cartoon about the reintroduction appeared in the Guardian on the 23rd of May drawn by First Dog on the Moon (a political commentary cartoonist from Australia). The cartoon centred on Europe’s nationalism. In the first frame, the history of the bison is recounted with the extinction blamed on Poland represented by the Polish flag. The extinction in Poland is contrasted with the reintroduction in Romania. First frame of the cartoon from First Dog on the Moon about the bison reintroduction in Romania, 23 May 2014

Several of the following panels have national overtones, like the Iberian lynx saying ‘Hola’ and the beaver in a Scottish flag t-shirt. The last panel contrasts the willingness to bring nationally-extinct animals back to these countries with the growing nationalistic sentiments among voters in the EU. While the “Belgian” pine caterpillars and “Bulgarian” water voles in the cartoon aren’t species targeted for reintroduction, those that are almost always cross national lines. Whether it’s beavers brought from Norway to Sweden in the 1920s or the bison sent to Romania from stock bred in Sweden, extinction (and thus reintroduction) is most often defined by an animal being absent within a country’s borders. Politics then necessarily plays a part.

Political ties make some reintroductions possible because animals become available. For example, the muskoxen brought to Norway came from East Greenland, which was at the time controlled by Norway. Such an arrangement even led to justificatons of the reintroduction. John Angard, who was local manager for flock, wrote in 1958 about the muskox reintroduction:

In Norway, there is one find that shows that muskox lived here in prehistoric times. This find came from Dovre. In addition to the fact that Greenland in its time has been Norwegian, one can claim on this ground that the animal has come back to its home range.

Political ties also encourage (or discourage) reintroductions. Many of the species targeted by reintroduction projects in Europe, including the beaver and wolf, are listed in the EU Habitats Directive under Annex IV ‘Animal and Plant Species of Community Interest in Need of Strict Protection’. Under Article 22 of the Directive, the member states are required to ‘study the desirability of re-introducing species in Annex IV that are native to their territory where this might contribute to their conservation’. National politics and borders enter into the Annex IV list with qualifiers about certain countries–beavers are not protected in Estonia, Latvia, Lithuania, Poland, Finland or Sweden, for example. But since the UK is not on the exemption list, those wanting the beaver reintroduction in Scotland and Wales can turn to this international legislation for support. The lists themselves are products of negotiated politics.

As I think through these issues, I can’t help wondering: Are those “scientific” exercises of defining native and non-native species all that different from nationalistic politics that define people as belonging or not? Are these two sides of the same new nationalistic coin?