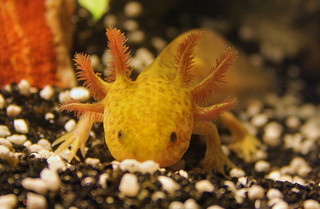 My twitter feed was buzzing this afternoon about John Platt’s Sunday Species Snapshot on the axolotl. The axolotl is an awesome-looking salamander native to the Mexico City area that never metamorphosizes out of its larval state, thus it retains gills. The post is titled “Did the axolotl just go extinct?” and was inspired by a Huffington Post article last week. The axolotl’s habitat has been basically erased by the growth of Mexico City and draining of the area’s lakes. This has been a long process, and newspaper articles, like one in the New York Times from 2012, have pointed out the eminent danger to the species. But with today’s Snapshot story, some amphibian experts piped in to correct the story saying that another field survey is happening this spring, so we can’t be certain that the species is gone. A pet axolotl bought in May 2011 and named Frida by her owners. Photo by carnifex82 on Flickr and reproduced under CC BY-NC-SA 2.0 license.

While that correction was good, the discussion still made it sound like axolotls might be extinct. But nothing is further from the truth. Although axolotls might be extinct in the wild, there are huge populations in captivity. The species is highly sought-after in biomedical research because it has amazing regenerative properties and it is a common aquarium-enthusiast species. The Ambystoma Genetic Stock Center (AGSC) at the University of Kentucky maintains a breeding colony of axolotls, which are sold to various research institutions. When the colony was an University of Indiana (it moved in 2005), the colony had an average of 600 to 700 adults and shipped out about 300 eggs per week (Gresens 2004). Considering that this is just one breeding center, we should not be concerned that the axolotl will become extinct.

It may, however, become extinct in the wild. Since there is a large population of axolotls available, a reintroduction might be possible — assuming appropriate habitat is restored. Reintroduction of extinct in the wild species has happened before, with European bison, Arabian oryx, black-footed ferret, and red wolf topping the list of successful reintroductions (a good list of successes and failures is available online). Although most of the projects are mammals, one of the successes is a fish, Yarqon Bleak, which was reintroduced to 12 sites in Israel, and another is the Kihansi Spray Toad which was returned to Tanzania after being bred in US zoos. We have some historical attempts to look at if we want to repopulate axolotls in the wild, whether they become entirely extirpated in the wild or, if some do remain in the wild, we want to reintroduce them to prior habit.

A side note here: Just so there is no misunderstanding, I’m not saying it’s ok for us to kill off the axolotl in the wild because they exist in captivity. We need to do everything we can to save the axolotls and their habitats. My point is that the species is not going to disappear any time soon.

So all this got me thinking about what counts as extinction — or more broadly, what counts as failure or success for animal species. After all, the axolotl has been extremely successful as a population. These funky Mexican salamanders have been able to spread themselves all over the globe because of their unusual traits. First, they attracted scientists who wanted to understand the species’ usual metamorphosis (the first specimens were shipped from Mexico City to Paris in 1863). Then, axolotls got the attention of medical researchers working on heart defects and embryonic development. Finally, they turned out useful in wound healing and limb regeneration research. And on top of that, their cool looks garnered interest from individuals wanting to have them at home. I’m reminded of the tulip in Michael Pollan’s Botany of Desire — it’s been extremely successful from a biological point of view, even if that success isn’t in the wild. The axolotl could be written as a success story.

In light of that success, I want to end on a positive note. Even from behind a glass wall, the axolotl has the ability to captivate us, to draw us in, to make us realise what it is to be human simultaneously with what it is to be non-human. This is said so beautifully in a passage from the marvellous “Axolotl” by the Argentinian writer Julio Cortázar:

My face was pressed against the glass of the aquarium, my eyes were attempting once more to penetrate the mystery of those eyes of gold without iris, without pupil. I saw from very close up the face of an axolotl immobile next to the glass. No transition and no surprise, I saw my face against the glass, I saw it on the outside of the tank, I saw it on the other side of the glass. Then my face drew back and I understood.