Moving animals around is no easy task. In translocations (a catch-all word which is used in science to mean moving animals around for many different reasons), the animal has to be crated, calmed, and carried away to its destination. Transportation means vary by location. In the first Swedish beaver reintroduction effort in 1922, train, horse cart, sledge, boat, and foot were all involved.

In 1934, a Norwegian beaver bound for her new Swedish home got to fly on a plane. In a previous post I’d written which discusses the flight, I said it was a pair of beavers, but now I see that it was just one female. In fact, for just one beaver being moved, two hydroplanes were taken! The reason was that in addition to the pilot and people involved in the reintroduction, including Eric Festin, a mechanic needed to make the journey in case a plane broke down and there wouldn’t have been enough room for him with just one plane.

But the flying beaver is nothing compared to the parachuting beavers I found in an article in Popular Mechanics from 1949 titled ‘Moving day for the parabeavers‘. Beavers in Idaho that had become nuisances by backing up water into unpopular places needed to be relocated. Although beavers had been nearly extinct in the state at the beginning of the 20th century, a successful conservation program had led to a dramatic recovery. According to the article, the Idaho beaver population by 1949 had rebounded to about 90,000 beavers.

In addition to the standard relocation via truck, the trapper John Rynearson had set up an ingenious translocation scheme: parachuting. A special beaver crate was constructed with a parachute attached and a problem beaver put into it. A plane was flown over an uninhabited suitable habitat area and the crate was dropped out. The crate would parachute to the ground and then the specially-designed crate would open, letting the beaver out to its new home in the middle of nowhere. This ‘cheaper and more reliable’ alternative to ground transportation offered possibilities to relocate the beavers anywhere. As of the writing of the article in 1949, 35 beavers had been successfully dropped from the sky to new homes. It must have been a sight to see beavers drop from the sky. 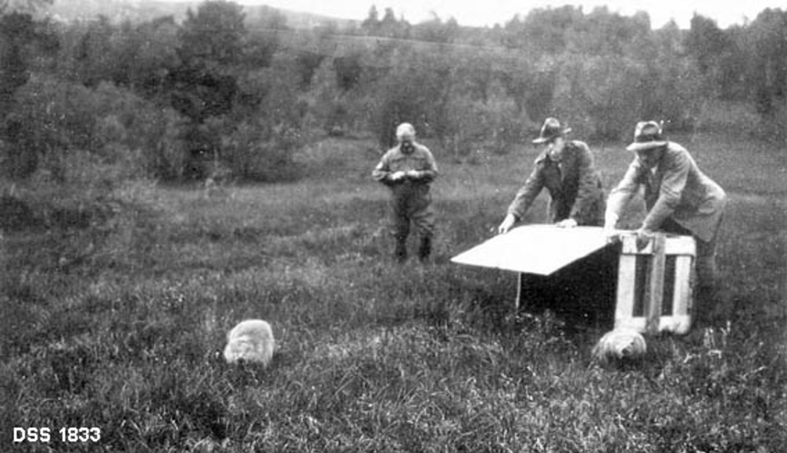