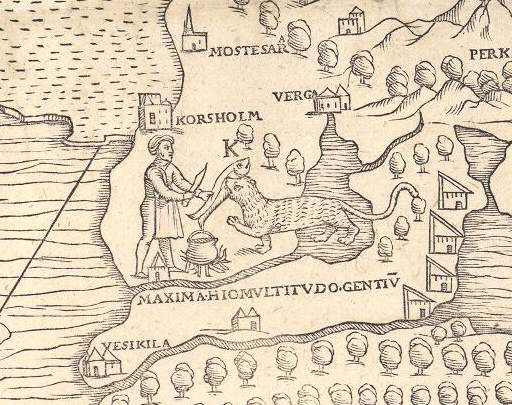 The Eurasian otter (Lutra lutra) is extremely widely distributed in Europe and Asia, but in spite of its huge range it is also linked historically to certain geographies.

The otter is not included in the medieval bestiary corpus, unlike many other European animals like the beaver which makes regular appearances. There is a bestiary animal called the ichneumon which some have identified as otter, but it is much closer in description to a mongoose (the ichneumon’s primary trait is its ferocity toward dragons, crocodiles and snakes). But otters do appear on premodern maps. Olaus Magnus included an otter on his Carta marina from 1539. He places this otter in the region of Östrabottnia, Finland. The otter is shown bringing a fish to a man. In the text which accompanied the map (Opera Breve), Olaus Magnus explained the image as “the animal Lutherus, common in Finland and Bothnia, which sometimes can be domesticated to bring fish to the kitchen.” In his longer treatise Historia de genitbus septentrionalibus (Description of the Northern Peoples) from 1555 Olaus says that otter domestication of this type was practiced in Sweden “on the estates of some eminent citizens” where when a cook gave the otters a signal “they dive into a pool and catch a fish of the size he has indicated, returning for another and yet another until his instructions have been completely satisfied.” I can’t confirm that this is a true story. However, I’ve seen that otters in modern zoos and aquariums certainly like to play and they can do tricks, so maybe they were domesticated fishermen of the 16th century.

Later cartographers also included the otter and fish image. Liévin Algoet’s Terrarum septentriolium exacta novissimaque descriptio per Livinum Algoet (1562) has a similar image in almost the same geographical spot. Anders Bure included a otter carrying a fish in its mouth (although there is no human master to be seen) in Sweden north of Luleå on his map from 1626. At first I thought Bure’s map was showing a beaver, but after reading Olaus Magnus’s text and seeing his map, I realised that it was an otter. They are to be found in northern waters, especially those of Upper Sweden Hälsingland, Medelpad, Ångermanland, Jämtland, and Eastern and Western Bothnia.

To Olaus in the Middle Ages, the north of the north is where these animals belonged.

What’s interesting then in contemporary conservation policy is how the otter has been envisioned as an animal that should be found throughout Sweden. Otter experienced a population decline in Sweden beginning in the 1950s. In addition to hunting (it was a popular pelt animal with around 1500 animals killed each year in the late 1940s), PCB contamination of its food sources was blamed for the decline. The otter was listed as a protected species in Sweden in 1968 in the face of dramatic declines. A WWF conservation project “Projekt Utter” started in 1975 to work toward conserving the species. The otter survey from 1975-77 indicated that there were probably 1000 to 1500 otters in Sweden. Most of the existing otters were in north. So the south became the conservation target. A reintroduction program run from 1987 to 1992 brought wild-caught otters from Norway (I love how Norway is the source of ‘Swedish’ reintroduced fauna – so ironic) and released 47 in Sodermanland and 7 in Uppland. Genetic tests show that apparently some of the reintroduced animals have entered into the reproductive pool. There are probably over 2000 otters in Sweden now.

The Conservation Plan for Otters in force through the Swedish EPA identifies the primary conservations actions as studying otters more (a common but not necessarily effective approach to a problem is to study it more),  disseminating information about otters, and building wildlife passages under roads (traffic accidents are now the single greatest cause of otter death — 12 of them from Jan to Sept 2014 according to the Swedish transport statistics). Again, most of the focus is on southern Sweden.

Shifting baseline syndrome often assumes that people will take a lower population of an animal species as the normal, accepting this reduced biodiversity. But I wonder if it sometimes works the other way. People assume that an animal has and should be in a place because of political borders that define units like a country or big scale range maps that shade an area as ‘suitable habitat’. I’m not saying that there haven’t been otters in southern Sweden in the past, but if take seriously the 16th and 17th century sources, otters were an animal that belonged in northern Sweden, not the south.