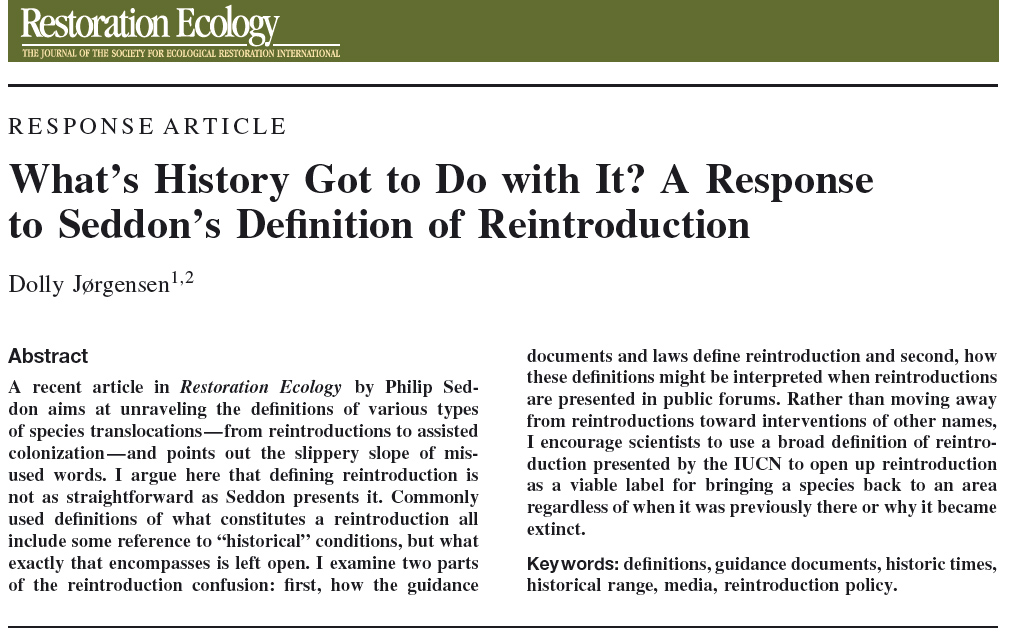 I was pleased to find out today that a response by Dalrymple and Moehrenschlager to my Restoration Ecology article on the ambiguous definitions of reintroduction is available on the journal’s Early View page. Most importantly, the ambiguity I pointed out has led to a policy change. The current revision of the IUCN Guidelines Reintroductions and other Conservation Translocations in preparation by IUCN Species Survival Commission Reintroduction and Invasive Species Specialist Groups will be changing their language based on my article.

Now a reintroduction will be defined as returning “an animal or plant into an area in which it was indigenous…” As the authors of the response acknowledge, there is still the question of defining what is indigenous, but at least it will no longer use the phrase “historic times” which I’m glad to see because of its negative colonial implications.

The authors of the response agreed with my position that reintroductions aren’t just for species directly extirpated because of human action, although they felt I was too narrow in my focus on reintroduction over the other types of interventions Seddon is talking about. Just for the record, I don’t have a problem with assisted colonization or translocations, or the way in which these have been defined by Seddon (or used in practice, for that matter). My work was focused only the definition “reintroduction” because I noticed the inconsistencies and dangers of how scientists had defined and been using that particular word.

In any case, even if the IUCN groups didn’t agree with everything I wrote, what I wrote is going to make a difference, however slight. And that’s what every historian hopes for.